Never underestimate Superman fans all it will take for them to fellate Miller is for him to superficially show Superman being "cool". That's all it takes, some Superman fans did a complete 180 after DKIII just because Superman saved the day.
0 x
Top

I actually remember how many suddenly started to claim that "Ol' Frankie gets Superman after all ?!!". Yup, all it took is for Frank to show Superman not only saving the day, but overshadow Batman and have him fanboy over how awesome and cool Superman is. Don't forget that their long standing hate for Frank stems from nothing more than him having Bruce beat Supes in DKR. The reason was never any deeper than that.
0 x

Ya' Frank suddenly 'got' Superman overnight because he portrayed him getting one up on Batman and in the process invalidating their previous fight. I hate when writers just have Superman go; "Well I was holding back the whole time",
like WTF why?
Shit doesn't make any sense. Was he holding back while people died? Such lazy writing but I guess it is good enough for Superman fans.
The truth is all Superman fans want is for him to be the best at everything and the one to come in and fix all the problems while everyone else looks foolish. Just like in the Justice League movie.
1 x
Top

ThatOneGuy wrote: ↑
Mon Mar 18, 2019 8:40 am
The truth is all Superman fans want is for him to be the best at everything and the one to come in and fix all the problems while everyone else looks foolish. Just like in the Justice League movie.

While also claiming that Batman fans just want to wank him and see him be the best at everything. Man the amount of projection that those guys do is amazing. That last part of your post is also very important. It's not enough that Superman is the best, but it's also important that other characters look incompetent in his presence, especially Batman. Both Batman and Superman looking cool is not acceptable either, as the mere idea of Batman doing anything cool seemingly detracts from Superman's all encompassing power.

It's Superman god-given right to be the strongest and bestest at everything, don't you know ? Uncle DC said that. I still remember the complete melt down that they had when Diana beat Superman in Injustice, with Batman claiming that he pit the two against each other knowing that Diana will win. Watching the SMWW cultists eat each other was glorious I won't lie. Superman fans love SMWW only when it's made clear that Diana is second to Supes. So while Batman is definitely their biggest trigger, I wouldn't say they discriminate in their hate against other characters.
1 x

Skip to the comments. Hopefully it's indicative of a trend. Haha.

https://www.newsarama.com/45195-nothing ... -look.html
1 x
“These characters were like twelve-bar blues or other chord progressions. Given the basic parameters of Batman, different creators could play very different music.”
― Grant Morrison
Top

God I still remember Frank's comments about how "sexy" Superman's powers are. I see a lot of people, especially Superman fanboys, worried about Frank writing the character because he "hates" him. No, Frank doesn't hate Superman, he just hates good natured, mild mannered, boy scout Superman. He thinks Superman's powers entitle him to do whatever he wants, and to have all the women in the world.

Who remembers the analogy that Frank made about Batman and Superman ? He said that Superman is "sexier" than Batman, because Batman rises up and down when he swings himself around, where Superman takes off and "stays up". Frank's understanding of these character is far more disgusting than simple hate. This of course explains Frank's fascination with SMWW, as his ideas of what Superman should be and why he's entitled to a woman like Diana pretty much encapsulate SMWW's entire existence.

People are not excited for Frank's Superman Year One book, but that's not for any of the right reasons. Similar to how people hate on King's Batman now mostly because he never gave them their BatCat wedding, and not because they realize how terrible his writing is. At least I can assure the SMWW cultists will be first inline to buy Frank's new book that's for sure.
1 x

I hate douche superman if you write him like that he is just a villian and lex is justified to take him out for that reason. Some superman fanboys who write figured that out so they make sure to make lex super crazy so if superman acts douchey it will not make lex look like a hero . Also Diana should be a better fighter than superman because she had centuries of training in many different martial artsand Supes just knows some so called kryptonian martial art and boxing. That is why I hate sm/ww brings out the worst in each character and the same for batcat makes no sense. Batcat only worked in earth 2 the original because she quit being a criminal but that would be boring and sexist that is why the current way they write bat cat makes no sense I wish someone brings that up
0 x
Top

ARB wrote: ↑
People are not excited for Frank's Superman Year One book

Building on that, here's a review of the first issue (echoing your sentiment):


https://m.ign.com/articles/2019/05/16/d ... e-1-review
0 x
“These characters were like twelve-bar blues or other chord progressions. Given the basic parameters of Batman, different creators could play very different music.”
― Grant Morrison
Top

Not surprising. Frank Miller should really stop writing comics at this point. His views and understanding of comic book characters are fundamentally broken, and there's no getting around that. A contaminated soil could never grow anything good. This is the same reason why I'm frustrated by all the people who keep giving Tom King's chances in the hope of him magically improving. It's not gonna happen. These people are writing what they know, and that will never change.
0 x

Here's the much dreaded preview of... DARK KNIGHT RETURNS: THE GOLDEN CHILD... 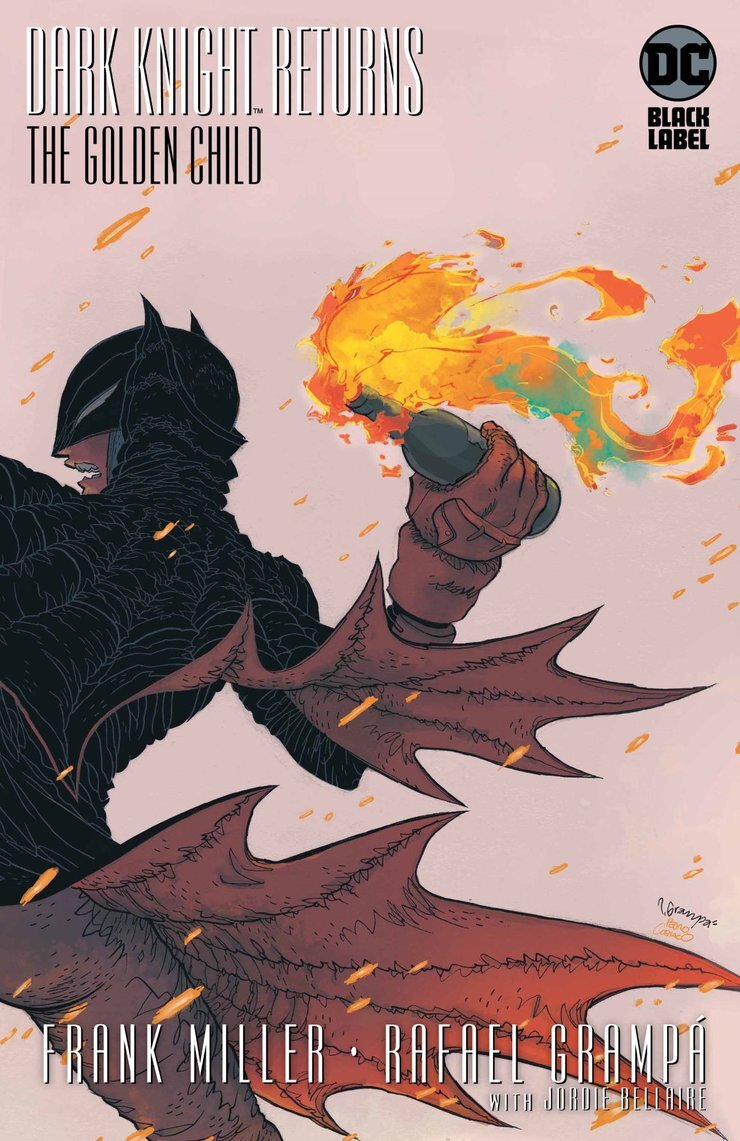 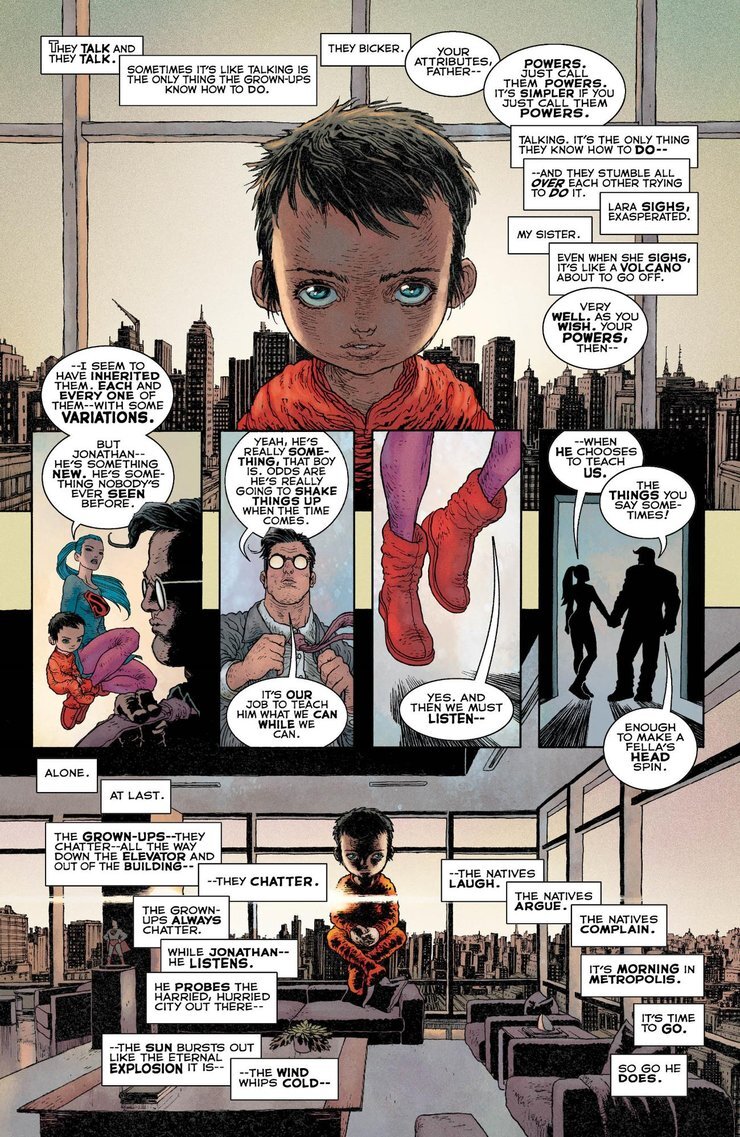 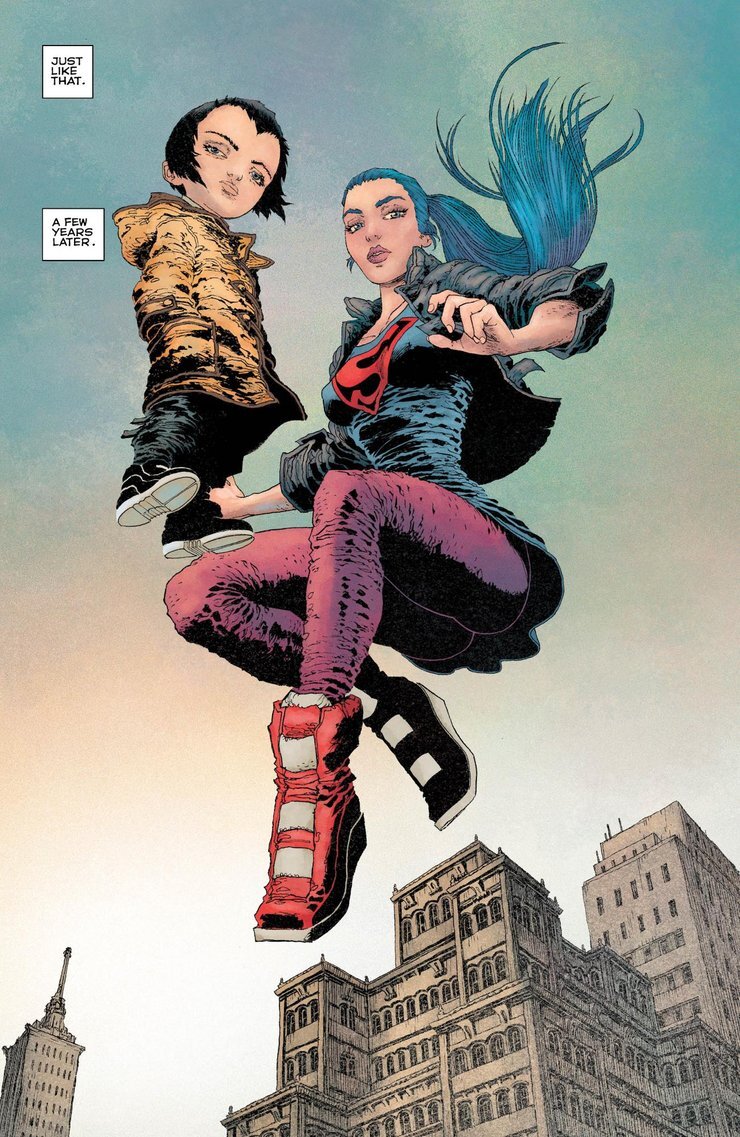 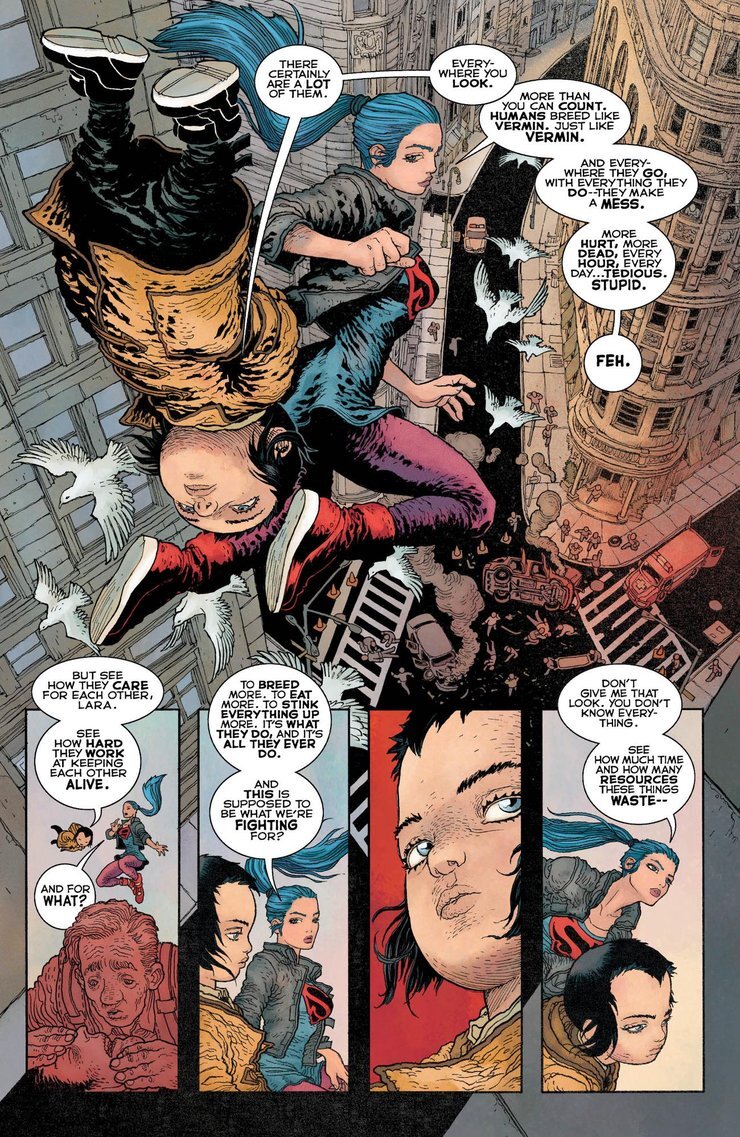 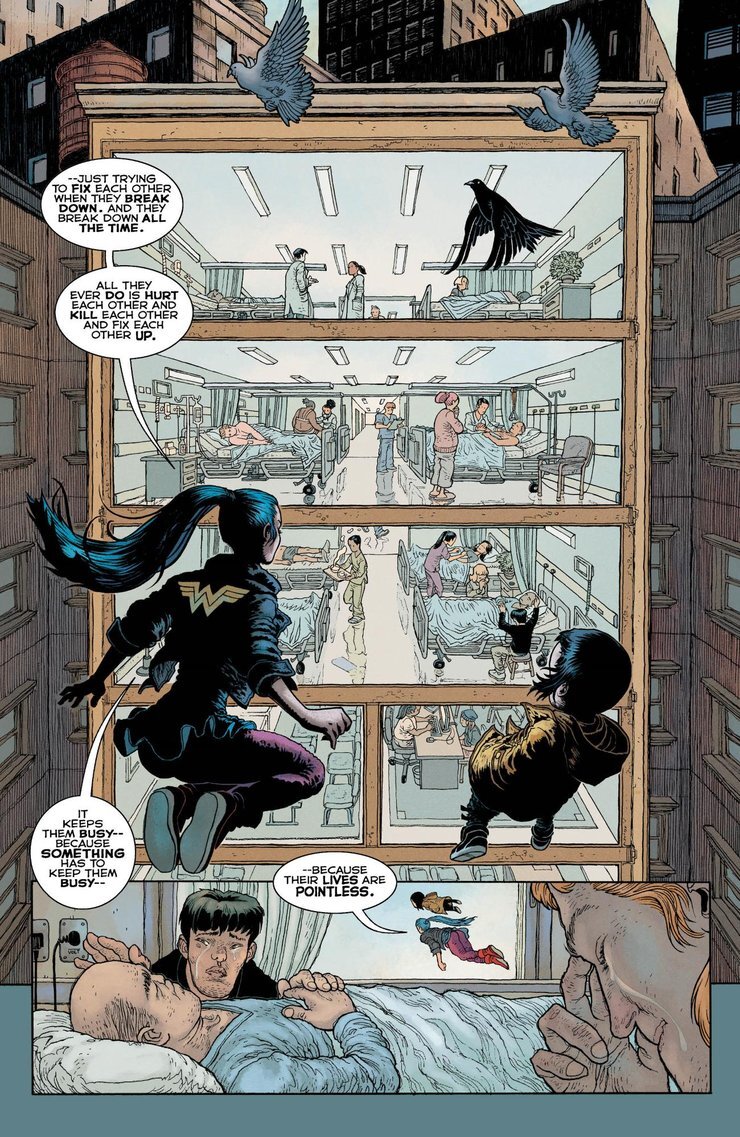 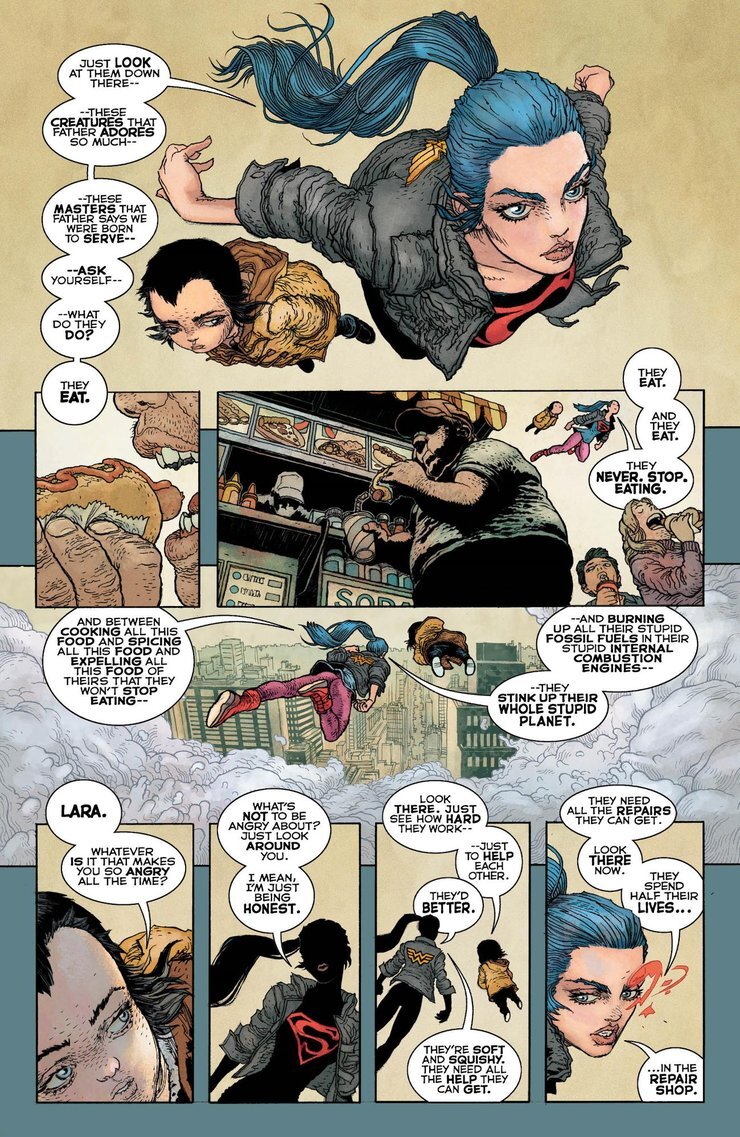 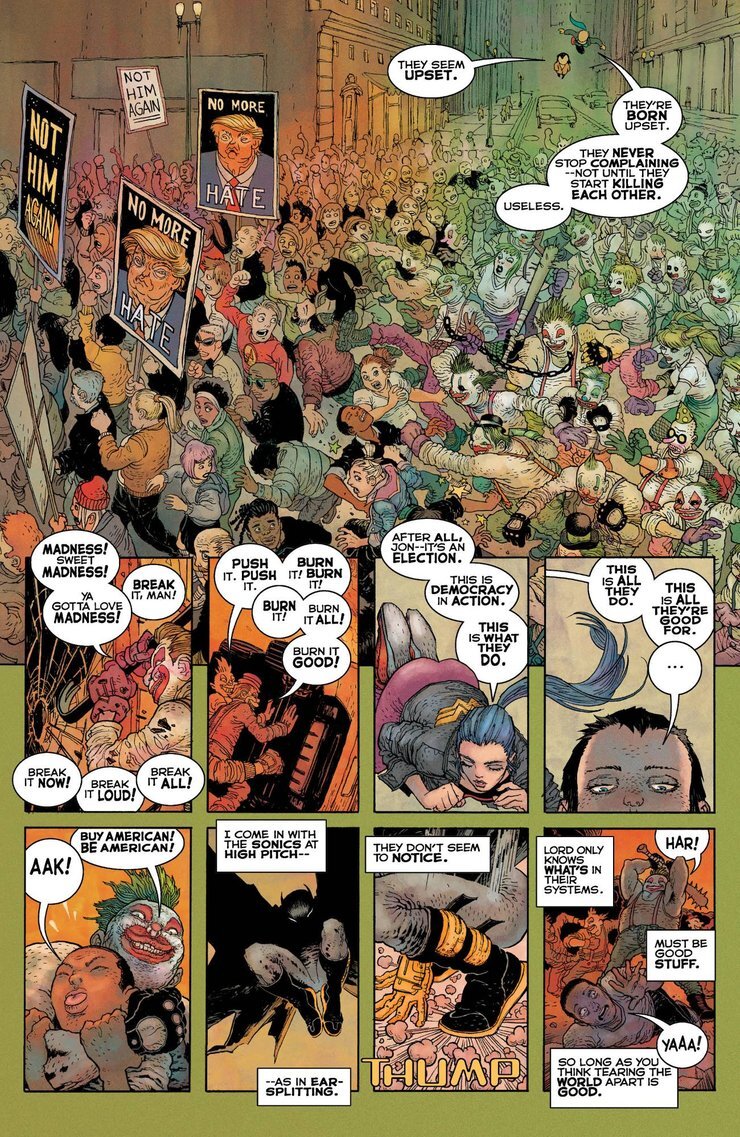 What i find ironic is that this preview is pretty much everything bad you could expect from an union between Superman and (THOSE versions of) Wonder Woman. Children with huge god-complexes that looks down on humanity in some form or another.

Oh, and it bear reminding that Lara here was raised mostly in secrecy sorely by Wonder Woman. She's even wearing a Wonder Woman jacket to identify which character she's representing in this new dynamic that resembles very much the old one.
0 x
Top
Post Reply
50 posts

Return to “Other Comics”

Users browsing this forum: No registered users and 4 guests