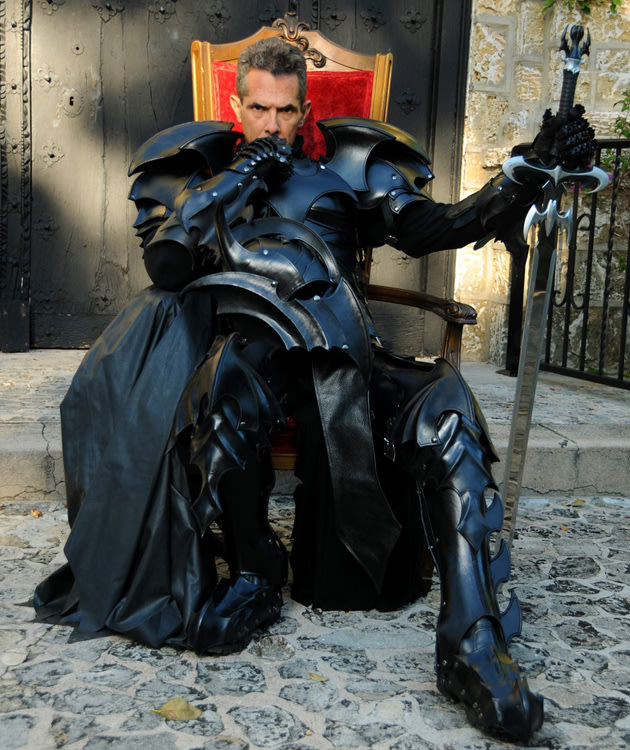 Dedicated Batman fan Carlos Blanchard commissioned craftsman Samuel Lee to build the impressive leather and metal outfit, which features the well-known batman-logo on the chest plate and the sword.

The suit set back Florida-native Blanchard around £5,000, though it was money spent for the 50-year-old as he wears it whenever he gets the chance.


“It has been a dream of mine to have a full suit of armour that Batman would have worn back in the Medieval Ages,” he admitted.

“Being a professional graphic designer, I decided to put pencil to paper and design my idea of what it would look like if I would have been Lord Wayne back in the 1400's.

“I wear it every chance I get, and scream out Samuel's name at every opportunity I get, as he deserves all the praise for making this unique piece of wearable art.”
0 x

That is awesome .. if I had 5000 pounds to spend I would get that .. and always walk around in it .. hells yeah to Lord Wayne
0 x
Nothing is harder to understand than a symbolic work. A symbol always transcends the one who makes use of it and makes him say in reality more than he is aware of expressing. - Camus

He’ll still be here long after I’m dead and forgotten; long after all of us have come and gone, there will be Batman. - Grant Morrison
Top

And anything I could ever make just became irrelevant.
That is so awesome
0 x
I have to find another path. Divine my own future. One uniquely mine. Not a page from someone else's book. Not a fate that begins and ends on page one - Oracle
Top

OMG... I can totally see an alternate universe movie with this armor. Bring on the Themysciran armor now!
0 x
'Sometimes finding yourself isn't as hard as you think. Sometimes you just need a nudge in the right direction.' ~ Barbara Gordon, the Oracle.